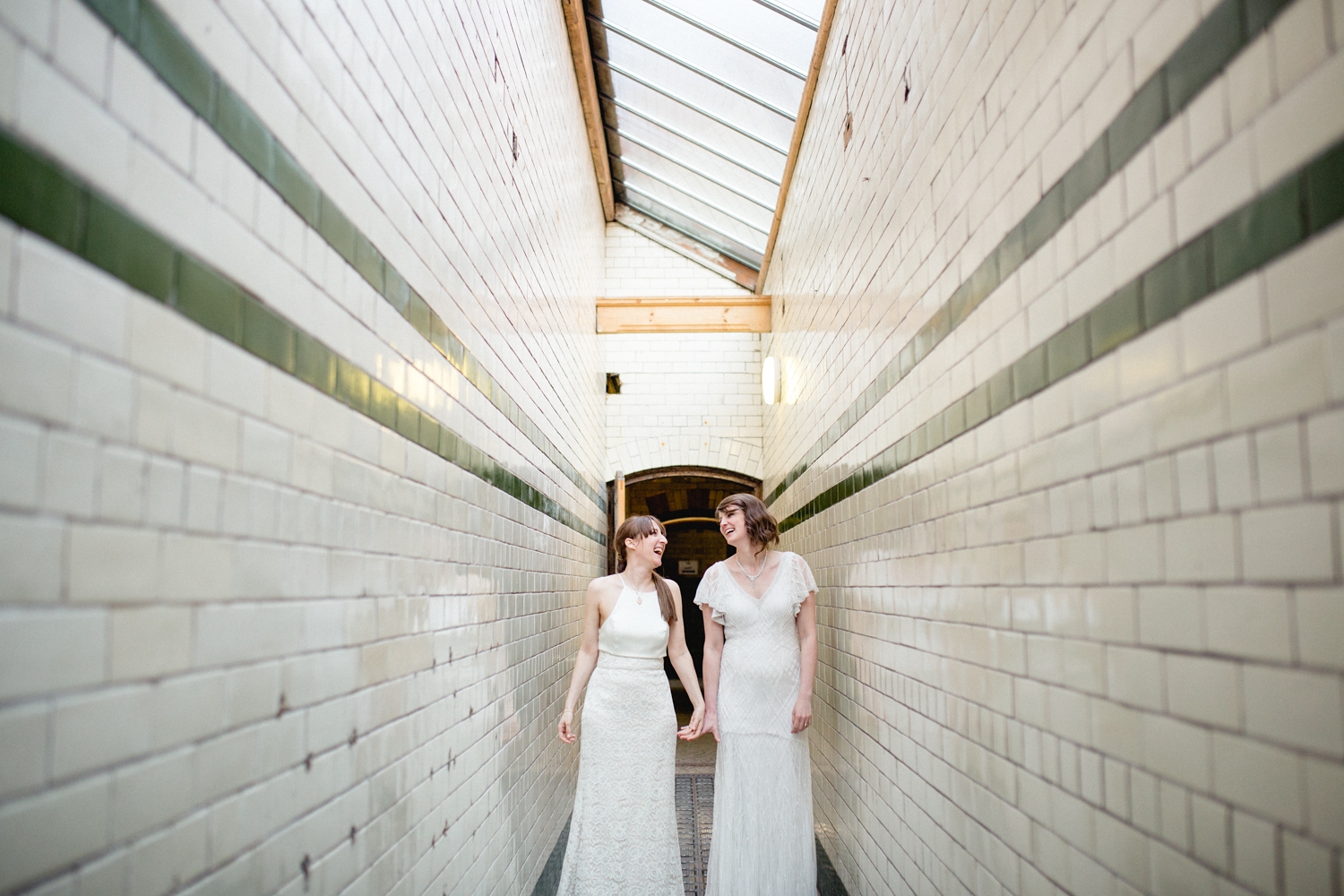 Victoria Bath’s is a unique wedding venue in Manchester. Set down on the edge of Rusholme, minutes from Whitworth Art Gallery and park it’s a little hidden gem. Although Katie and Jemma live down in London, they knew it was the right wedding venue as soon as they found the Swimming Baths.

In keeping with the look and feel of Victoria Baths, they went for nice and minimal styling. An old internal door came down to be used as a table plan. The baths have plenty of mix and match chairs in the different rooms so by making use of those and a few wooden benches for the main room. On the setup day before the wedding they had a tropical archway for the bottom of the aisle, with a custom-made stained glass heart. A little nod to those monster Victoria Baths windows that are being restored. They even had a custom diver neon light which was beautiful!

Jemma & Katie both got ready at the Gotham hotel in Manchester city centre, only a short trip away, but this meant I could join them both in the morning. Running between the floors it was great to be able to capture the reactions of opening presents from each other and the dress reveal with the parents.

When it came to walking down the aisle, with neither of them wanting to wait at the end, they decided to have a first look together. Following this, they joined both of their Dad’s at the shallow end of the pool to walk down as a four. During the service, we were joined by the rarest of treats in Manchester, plenty of lovely sunlight. Falling through the glass roof it casts such a perfect light on the service. Having a ceremony early in the day meant there was plenty of time for guests to enjoy the surroundings, while they hosted a drinks reception in the Turkish baths. Just before the guests went to sit down for the wedding breakfast the three of us went to explore and capture some portraits.

breakfast, served with plenty of wine, with the lovely surroundings what way would there be! Speeches followed with Katie and Jemma doing one together, finished off with some prizes. There was still plenty of time to relax and catch up before the evening celebrations began. Starting with a massive custom banner that dropped mid-song to David Bowie’s Let’s Dance, it got the dance floor going the for Ceilidh.